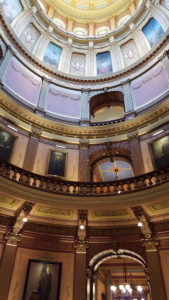 LANSING– Under a directive from Governor Snyder, MCOLES is conducting a “a community survey to help gauge public trust” in law enforcement, per a January 12 press release from the organization. The short survey is available via a web polling service and will accept responses until March 20, 2017.

TAKE THE SURVEY BY CLICKING HERE!

Executive Directive 2016-2 was signed by Michigan’s Governor on October 4th, 2016. It requires MCOLES to “undertake a study and produce by May 1, 2017, a public report addressing the topic of fostering public trust in law enforcement.”

MCOLES is the Michigan Commission on Law Enforcement Standards. “MCOLES is a state commission whose members represent law enforcement, prosecution, defense, labor, and the public. The 19 commissioners set standards for the law enforcement profession in Michigan, including police selection, training, recruitment, and professional licensing,” according to the SurevyMonkey web page where the poll is being hosted.

Under the new Public Act 281 of 2016, Section 602(5)(e), MCOLES will be receiving 5% of all the excise tax collected on marijuana sales in the new Medical Marihuana Facilities Licensing Act program. Once that program begins generating sales transactions, expected in 2018, MCOLES will receive millions of cannabis industry dollars and will likely become primarily funded by the tax on registered medical marijuana patients.

MCOLES also has established a special e-mail box so citizens can freely share general ideas. All comments will be considered but MCOLES wants respondents to focus on police community relations in their area. To submit general comments, or submit documents for consideration residents should send an email to:

Those responding to the survey or e-mail box will not be identified personally. MCOLES asks for a zip code to ensure all areas of Michigan are surveyed and there are three questions that ask for gender, race, and age. The survey does not ask for names or other personal information.

The survey takes no more than a few minutes to complete and incorporates both multiple-choice and written answers.