A look at Ionia County shows what a typical central Michigan community is like- how they participate, what they get from the State and how they spend their cannabis grant money 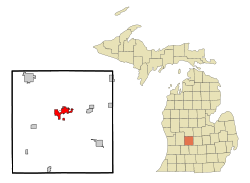 IONIA- Ionia County is located just east of Grand Rapids, north of Lansing and west of Flint. Those three cities have passed local laws in support of medical marijuana patients and businesses. Although Ionia is a small-town county it is not surprising that the community seems to be awash in medical marijuana patients- and that county is reaping a financial benefit from those registered ill and injured people.

Michigan has a program to reward counties with money based on the number of patients registered in that county. The funds come from the registration fees paid by patients and caregivers to the state, not tax dollars.

Ionia has approx. 64,000 people based on census data. Of those people 84.3% are over 18 years of age and classified as adults, or 53,952 people. The state’s medical marijuana program (MMP) reports that Ionia County has registered 721 medical marijuana patients in FY 2016 (not including those caregivers empowered to grow cannabis on behalf of the sick), of whom all but a tiny fraction are adults.

1.34% of all adults in Ionia County registered with the medical marijuana program in 2016- but that’s only HALF the story.

Michigan’s MMP is a two-year registration system, meaning that only approx. 50% of all participants registered in 2016. The total number of patients registered in Ionia County is actually 1,221- 2.26% of the entire adult population of the County.

In Michigan there is a total population of 9.91 million people, of whom 8.7 million are adults according to suburbanstats.com.  There are 218,000 registered medical marijuana patients in the state, per the latest report from the department which oversees the Program. Mathematics reveals 2.5% of all adults in Michigan are registered medical marijuana patients, making the Ionia County registration number in line with state numbers.

That patient population is responsible for some serious budget assistance to the Ionia County Sheriff Department, courtesy of that reward program. A $16,475 annual grant was given to the County in 2016 by the state to help the Sheriff Department carry out “education, communication and enforcement of the Michigan Medical Marihuana Act.”

That means $22.85 per medical marijuana patient was given to the County for the 2016 grant; each patient pays $60 for a two-year registration in the MMP, meaning more than 1/3rd the cost of a patient’s registration fee is returned directly to the County where patients reside.

On a 2-year basis Ionia County would be eligible to receive $27,900 in grant money from the State based on their registered medical marijuana patients.

During a meeting of the County Commissioners recently the grant monies were allocated to pay some operating expenses, none of which are educational or communicative. County Commissioners decided that more than $10,000 would go toward paying “wages and fringes” for the one officer the County assigns to the regional narcotics control agency, the Central Michigan Enforcement Team. The remaining funds from the 2016 grant were allocated to purchase guns, cameras and two bullet-proof vests for Sheriffs.

Clearly having medical marijuana patients in the County has directly translated into a financial reward, and indirectly contributed to the safety and welfare of the Sheriffs responsible for policing County lands.

Although every County in Michigan is able to receive these grant funds from the State, not all counties apply for the funds. Counties have to initiate the process of requesting the reward- a system which seems to be changing for FY 2016-17.

On March 3, 2016, the House Fiscal Agency included in its summary of ‘Major Boilerplate Changes’ initiated by the Governor’s office and approved by the House an alteration to the Sec. 902 requirements. The Governor “directs LARA to collaborate with police agencies regarding the availability of funds” during the next grant period. The Michigan House of Representatives “concurs with the collaboration language.”

One thought on “Pot, Population and Payola”