Advice From An Old Guy

John Dingell reflects on the changes needed to American government

Michigan Democrat John Dingell served in the United States Congress for more than 59 years. He holds the record for length of service and was first elected to office in 1955. He has since retired and recently authored an op-ed for The Atlantic.

His opening paragraph makes this sad observation about the failure of American politics and the reason why.
“It is the complete collapse in respect for virtually every institution of government and an unprecedented cynicism about the nobility of public service itself.” 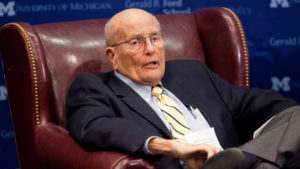 Dingell lists out reasons for the recent decline in confidence about our American system (you can guess what they are) but the meat of his argument is found in the suggestions he makes for correcting the flaws in our electoral and administrative systems.
Full participation in the electoral system, including automatic registration for all US citizens who reach age 18. “Advances in technology can make this happen effortlessly,” he correctly states.
Eliminate money in campaigns for public office by funding them through the government. “If you want to restore trust in government, remove the price tag,” he wrote. As the longest-serving member of the US Congress, he is uniquely suited to make this observation and to make it intelligently.
Eliminate the US Senate as a body whose role of establishing equality among the states has been eclipsed by its dysfunction. “California has almost 40 million people, while the 20 smallest states have a combined population totaling less than that,” Dingell observes. The 12th congressional District in Michigan has more people that the states of Wyoming and Vermont. “These sparsely populated, usually conservative states can block legislation supported by a majority of the American people. That’s just plain crazy.”
Dingell says protecting the free and independent press (like the magazine you are reading now) is essential to the function and reform of American politics. “(N)one of the branches of government can be trusted to function honestly without an unfettered free press vigilantly holding it accountable.” Anyone familiar with the evolution of the medical marijuana law and the reconstruction of the Local Option Bill into the MMFLA program has seen what government is capable of when they do not fear the wrath of the press or the people.
Some of Dingell’s suggestions seem out of reach in 2018 America, but without ideals we have no goals to strive for. This is a long game, not something to be accomplished in a rush by Executive Order. Dingell observes in the Atlantic piece that “profound societal change happens incrementally, over a long period of time.” With cannabis law reform and the Michigan movement, this has played out in real life.
Ten years after the voters gave our state medical cannabis they gifted us with a legalized system. This incrementalism is what Dingell referred to. Within the next two years we will expunge the records of those whose past crimes would now be legal under the new law, we’ll take a leadership role in the US hemp industry and we will regain a piece of our collective soul which was taken from us by the War on Drugs.
It is a proud time to be from Michigan.