In Michigan the race for the Attorney General’s job features Democratic nominee Dana Nessel and her Republican counterpart Tom Leonard.

Leonard is significantly behind, according to pundits. A recent poll from the Detroit News shows the Democrat has a 42-29% advantage in the contest. The lead Nessel has built seems to have sparked Leonard into a more aggressive and negative campaign style.

Some former Nessel campaign staffers were recently quoted in media with negative comments about the candidate; Leonard pounced on the perceived vulnerability by holding a press conference where he slammed Nessel and warned the state that her presence in the A.G.’s office would be disastrous for the state.

Leonard’s desperate grab at media is symptomatic of the difficulties all Republican state office-seekers have experienced in the Great Lakes State this year, where all of that party’s major candidates are reportedly upside-down in the polls.

Being upside-down means a candidate’s unfavorable rating is greater than their favorable rating. For example, President Trump was rated at 55% unfavorable with only 39% favorable in a poll conducted in Michigan by Strategic National, which was released on September 11.

The Republican stain seems to extend to people with whom the public is barely acquainted. In a significant race for U.S. Senate, incumbent Democrat Debbie Stabenow has an unfavorable rating of 34% and a favorable rating of 60%. Compare this to her political newcomer opponent, war hero Republican John James, whose unfavorable is 41% and favorable rating is just 40%. In the race for Secretary of State the Democratic candidate is favored over her Republican opposite by a margin of 44-29%, based on the Detroit News poll. 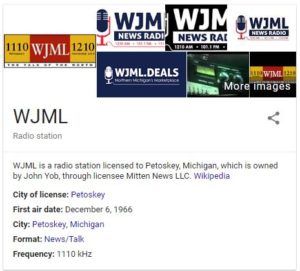 The Strategic National poll was conducted on behalf of WJML News Radio; oddly enough the Strategic National corporation and the radio station are both owned by the same man, John Yob (see illustration). Yob was identified as a “(Tom) Leonard consultant” in a recent article from MIRS news (link unavailable) in which he was quoted as saying state Democrats are “clearly scared of Tom Leonard.”

Leonard’s desperate attempt at painting Nessel as unfit for the position was clearly a tool of advantage for Leonard’s campaign. The press conference featuring former employees is a “ridiculous and desperate ploy to distract media and voters because from the fact that Dana Nessel is up by double digits in the polls,” the Nessel campaign told the Detroit News. In the same article Michigan Democratic Party Chair Brandon Dillon characterized the Leonard attacks on Nessel as the actions of a “desperate and flailing candidate.”

Nessel’s campaign has been supported by cannabis law reform advocates. Her position on the medical marijuana program, the new business licensing system for servicing patients, and the proposed legalization of marijuana ballot question are consistent with the patient perspective, said Jamie Lowell, Board member of the MILegalize group.