Senator introduces bill to Senate, has it assigned to his Committee, adds it to that group’s meeting schedule with two hours notice and takes up bill for consideration all on same day; bill first to propose changes to Medical Marihuana Facilities Licensing Act 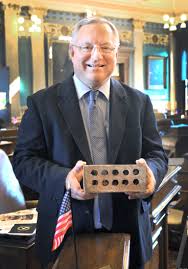 In the morning he introduced a new bill, SB 433, and had it assigned to the Judiciary Committee which he chairs. At approx. 1pm he had the bill added to the agenda for the next Committee meeting- which was held two hours later.

The need for this level of expediency in governing is not immediately apparent, as some of the change proposed in the bill is predicated on participation in a Federal Bureau of Investigation program in which Michigan is not even enrolled, according to the language of SB 433 itself.

The Senate Judiciary Committee secretary posted the Agenda for the June 6th meeting on May 31st, a full week prior to the meeting. This was that notice:

And any other business properly before the committee.

At 12:55 on June 6 an “Updated” agenda was sent out by the secretary with the following bills added to the agenda:

The bill’s description is “Marihuana; facilities; background check requirements for prospective licensees; modify.” It would change a bill passed by the legislature and signed by Governor Rick Snyder less than a year ago called Public Act 281, the Medical Marihuana Facilities Licensing Act (MMFLA).

That bill and several companions created a set of regulations and protections for legal cultivation, processing and distribution of cannabis through the confines of the state’s 8-year old medical marijuana program. The program boasts 240,000 registered patients and 40,000 licensed caregivers who provide for their directly-connected patients. A vast commercial system already exists in the state to service those patients, but those businesses are locally authorized and not state-sanctioned.

Enrollment requirements in the new MMFLA system were established by the language of the legislation, with the finer details to be added by a committee who recommends administrative rules. Those licensing requirements are expected to be finalized soon, to allow current businesses and potential applicants to start the process of preparing to qualify. That administrative rules group has not yet been named, although the Governor has named the group of people who will be responsible for approving the licenses received by the state. Licenses are not expected to be accepted before December of 2017, making this appointment a job which may not begin until early 2018.

While this process of finalizing the administrative rules is underway, Sen. Jones has introduced a bill which would require applicants to undergo a more stringent series of background tests, including a “national criminal background check” conducted by the FBI.

Background checks and fingerprints were already required for the Applicant and “each person who is an officer, director, or managerial employee of the applicant”, per P.A. 281. The federal screen would apply to all of those individuals as well. The Michigan State Police (MSP) would submit the background request to the FBI and then report the findings to the Licensing Board.

SB 433 would also require all the named persons to submit “written consent” to the check, and to their inclusion in a MSP database and a federal database which is not yet created. The MSP database searches for latent fingerprint matches from past cases and constantly scans the Applicant’s prints for matches with all new prints added to the MSP database. The “FBI Automatic Notification System” is a federal version performing similar function to which the MSP is not currently enrolled.

The rule requiring federal listing of fingerprints “does not apply until the department of state police is a participant in the FBI Automatic Notification System,” per SB 433. The bill is so new there is no Senate agency analysis of the bill at this time, and it still remains in the Senate Judiciary Committee until it has a second hearing.

The text of SB 433 is available on the state website HERE. A downloadable version is posted on The Social Revolution HERE