Watch the video of the Licensing Board- or read the summary of comments, asks, activities and insanity provided by The Social Revolution 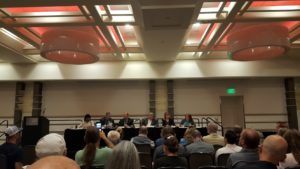 EAST LANSING- All major news outlets in Michigan have covered the controversial effort to shut down all testing facilities, processors, cultivation centers and dispensaries in the state, which was announced during the October 21 meeting of the Licensing Board for the Medical Marihuana Facilities Licensing Act.

The video of that meeting is now public. In it you will see one Board member consistently push a single-minded agenda- to enforce a policy of eliminating the existing medical marijuana business community in Michigan, either by direct shutdown or by discriminatory exclusion in the application process.

In truth, the Board did not authorize either of the proposals made by former Michigan State Police sergeant Donald Bailey. His move to order the Board to “shut down” or disqualify all dispensaries open after September 5 was put off until the next meeting, and David LaMontaine’s ordering of LARA to produce a master list of all businesses operating across the state in the patient services industry- complete with owner’s list- was essentially dismissed by Director Andrew Brisbo of the Bureau of Medical Marihuana Regulation.

Some of the comments made by activists and Board members during the October 21 meeting are noteworthy. You can read some quotes at the companion article, which is HERE.

The meeting began with the call for a massive shutdown of all facilities by Board member and former Michigan State Police sergeant, Don Bailey. His statement is summarized:

Bailey’s logic for shutting down the dispensaries and caregivers who supply them is an all-business, no-humanity take on the nature of cannabis commerce in Michigan.  issue of “fundamental fairness” to those who are “getting into the business or are contemplating getting into the business, that everybody start on the start line and nobody has a 40-yard advantage.”

The oddity of this statement was noted by the attendees. Here’s a former law enforcement officer who chooses to attack dispensaries because they create an unfair business environment- not because they are a threat to their communities, or because they are supplying illegal drugs or  making it easier for minors to get marijuana. No allegations of criminal behavior, just a need to be “fair” to as-yet unnamed businesspersons from Michigan.

The issue of the illegality of dispensaries “was settled finally on February 8 of 2013,” according to Bailey, “where the Supreme Court ruled that the Michigan Medical Marihuana Act did not provide for dispensaries.”

“It’s a four-and-a-half year old decision from the Supreme Court. This is very clear,” he added later.

“I think, in my mind, that these dispensaries that are currently open, they can’t possibly be considered for a license moving forward.”

Bailey was asked about when he proposed to initiate this shutdown. After saying the words, “This afternoon,” he settled on Labor Day. In 2017 that holiday falls on September 4th, just two weeks from the date of the meting. Anyone who remains open past then will not get a license from the Board.”

“So, anybody who is a dispensary currently has until Labor Day to close their doors if they intend to apply for a license under the Facilities Licensing Act.” He later decided that it made sense to do this the day after the holiday, September 5th.

Board member Vivian Pickard voiced support for the drop-dead deadline, and asked to extend the shutdown date for “a couple more weeks”.

David LaMontaine asked that the Board wait to vote on the issue until there was more clarity; the motion was tabled by unanimous vote. Discussion of a meeting by the Board in September received general agreement.

After the Public Comment portion of the meeting was concluded, Rick Johnson revisited the motion on the closure of all dispensaries, testing labs, processors and cultivation facilities in the state.

Don Bailey again disparaged the existing medical marijuana businesses. “In regard to the dispensaries that are open now, I don’t think in any respect that we should be rewarding people for not following the law as it currently is and that is what we would be doing.”

Concern rose that Bailey could not be objective in his duties as Board member. “What I have seen during my 36 years in law enforcement is different from your experience. I am not going to ignore my experience.”

Bailey not only attacked the message given to him by the 200 attendees, he took a shot at the messengers, too. “We’ve heard from a number of activists today. These are the same activists that I see on social media promoting recreational abuse of this medical marijuana. We’ve heard from them today.” The crowd reacted negatively, despite the fact that it his remarks came at the end of the hours-long session and the audience was whittled down to a fraction of its largest size.

“For many of the folks, I watch what they do, and it doesn’t line up with what they said here today,” Bailey said, of the people who testified.

“The bottom line is, it is fundamentally unfair to those (businesses)… that are abiding by the law by not opening. They are doing it the right way and they shouldn’t be penalized- which they will be, if these dispensaries are not closed down.”

Also in closing comments, LaMontaine, ever-aware of the disruptive effect of Bailey’s testimony, quipped, “I was hoping to get (my comments) in before Mr. Bailey did. I know how he gets you guys wound up.”

LaMontaine referenced the workgroups described earlier as a way for the medical marijuana community to participate in this process.

“If it’s got my fingerprints on it, I want this to be done the right way.”

Vivian Pickard said her time spent in both Licensing Board meetings “has been a learning experience for me.”

When Bailey’s proposed shutdown of all businesses in Michigan handling cannabis, she was a strong voice.

Bailey continued to argue his point on distribution centers. “These dispensaries were never legal,” he railed. Despite Pickard’s recommendation to postpone the vote, Bailey tried to force the Board to do just that.

As they discussed voting on the proposal, Chairman Rick Johnson sided with Don Bailey on the issue. “I agree with Don, they are illegal…” he began.

“My position has always been, what’s best for the patient,”Johnson said, and followed with a threat to existing businesses. “If we don’t do this today, we’re going to do it somewheres in the future. Because it needs to be done.”

After asking LARA and the Attorney General’s office to provide information to the Board, but not being specific about what information he wanted, Johnson concluded with, “All you business people out there, I’m glad for what you are doing, but by God, it’s the patients first.”

The meeting concluded without a vote on the proposal, but with a promise of a meeting in September when the full Board can make that decision.

You can view the full video (saved in two parts) by clicking HERE. Bailey’s opening comments come at approx. 11 minutes into the recording.

What the hell just happened?

Patients and the Intended Consequence of Action