(Editor’s Note: Rick Thompson was the Public Relations Director for the MACC organization, which is mentioned in this article. ~RT)

FERNDALE- On Monday night candidates, activists and residents spoke to the Ferndale City Council and told them that supporting the local Drug Task Force was a bad idea.

Surprisingly, the Council listened and voted to refuse “a small sub grant from the county,” which would have paid for drug law enforcement, said former Ferndale Mayor, Craig Covey. The reasoning offered by speakers at the Council meeting centered around the abuses suffered by state-registered medical marijuana patients at the hands of narcotics raid teams across Michigan.

Ferndale is a success story for the people, but it is only the latest in a series of victories gained by medical marijuana activists in the battle to stop an overreaching law enforcement community.

Earlier this year activists made a similar charge in Thetford Township, just north of Flint. Township Trustee Eric Gunnels led the fight to halt funding for the raid team operating in the Genesee County area, and that effort included testimony from this author and current candidate for Trustee Theo Gantos. The county had just been rocked with a series of raids on medical marijuana distribution facilities by that out-of-control raid team; the court case for one of those raid victims is still ongoing and is being led by Komorn Law.

Those raids took down a pair of distribution centers in neighboring communities Montrose and Clio. In Monrose the facility had existed for years and was approved by City Council. The action by advocates prevented thousands of dollars in Thetford Township funding from hitting the drug task force bank account.

Nearly the same action played out in Ferndale years earlier. In 2010, then-Ferndale Mayor, Craig Covey, visited a brand new business in his community and endorsed their existence while video cameras rolled. Covey’s endorsement of the Clinical Relief center inspired a sharp backlash from notorious anti-marijuana Oakland County Sheriff Michael Bouchard. Within days raid teams from his office descended upon the Center and the residences of the business principals. Covey’s endorsement seemed insubstantial to the Sheriff and his Deputies, who ignore local laws and enforce their own vision of the Michigan Medical Marihuana Act (MMMA).

Clinical Relief was led by the Agro family. It is 2016, and the charges stemming from that 2010 raid are still bouncing around the Oakland County and state Appellate Courts. There is no resolution, even six years later.

Although Clinical Relief is the most famous of the raids authorized by Bouchard, there were others. On the same day, Everybody’s Cafe in Waterford and Four Bears dispensary in Macomb County were raided by the Oakland County Deputies; other raids followed, including police actions in the Lapeer County village of Dryden and in early 2011, on my offices for the Michigan Medical Marijuana Magazine and the Big Daddy’s dispensary in Oak Park, a community neighbor to Ferndale.

Those 2010 raids were the inspiration for the first marijuana trade organization formed in Michigan, the Michigan Association of Compassion Centers. It was police action that galvanized the Michigan patient community. Community leaders held protests against the raids, including a bus tour that visited the Lapeer County Courthouse and Sheriff Department as well as the Oakland County Sheriff location. The raids continued, and thousands rallied on the steps of the Capitol Building in Lansing. 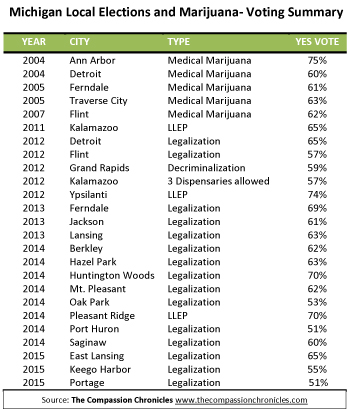 The raids slowly ebbed but never completely faded away. In 2015 Gaylord residents were shocked to learn a narco raid team in their region had swept in and raided multiple Centers in the city and surrounding area, some of which had existed for years without problem. The news went national, thanks to the efforts of state-based specialty reporters, and in response the raid victims themselves organized a petition drive to place a pro-dispensary ordinance on the books in Gaylord.

They were successful. Their reward: more raids from the narco teams. More charges. Al Witt, lovable and noted dispensary figure from the region, was sent to jail. Others plead out or are still fighting charges stemming from the original series of raids and the follow-up raids from 2016.

Amid this groundswell of state anger toward the seemingly unfettered Narcotics Enforcement Teams, Ferndale Council on July 25 asked their residents to pay money to support the raid team. Covey, no longer mayor of Ferndale, spoke against it. So did area resident Deb Young (MILegalize Board member), who led a successful effort to legalize marijuana in Ferndale via a petition drive; Steve Sanderson, another raid victim from the Gaylord actions; and Charmie Gholson (Michigan Moms).

Like the efforts in Thetford, the people’s voice carried weight. Ferndale activists continued the trend of fighting the narco raid teams where they hurt most: in the pocketbook. Narcotics raid teams fight against heroin and methamphetamine in Michigan cities, a necessary endeavor, but raid team leaders are slowly getting the message that jamming up medical marijuana patients- and the businesses that serve them- is a losing proposition, from a public relations standpoint and from a financial perspective, too.

NOTE: Craig Covey is challenging Michael Bouchard for the job of Oakland County Sheriff. The Primary Election in Michigan is held on August 2nd; the general Election is November 8.

CORRECTION: Craig Covey reported inaccurate information in this story. “Ferndale did not halt its funding of NET, but rather just refused to take a small sub grant from the county,” said the candidate. The story has been corrected to reflect this. Thank you, Mr. Covey. ~RT